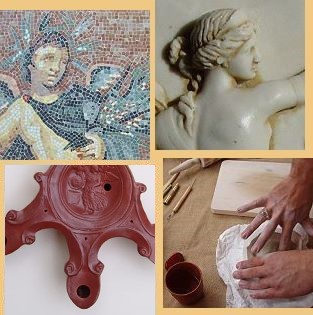 The Roman Empire and its relicts which are still present in our times have been fascinating me since my childhood. I was born and raised in El Viso del Alcor (latin name: Bastilippo) in the south west of Andalucia (Spain). There, you can still find a considerable amount of ruins and remains dating back into the Roman times. Since I was a child, these Roman remains do represent for me a source of questions, inspiration and fascination. We used to play in an olive grove near to my home where the ruins of a Roman “villa rustica” reside and we were excited to discover some fragments of a marble sculpture or pieces of a mosaic or tiles. The dimension and arrangement of the ruins raised many questions for me: how might this villa have looked like in its time of prosperity, how did the daily live used to be for its habitants?

Later, at university, I studied Roman History – a study that will accompany me throughout my whole live. I participated in various workshops where I learnt the methods, crafts and tools for producing replica of Roman daily items and artworks, such as oil lamps, sculptures and mosaics.

On the following pages you can see the replica that I produce on my own. I have the ambition to reproduce the antique originals in their very detail. My clients are private people as well as museum shops. Come and discover yourself the fascination and timeless beauty of the Roman works of art.